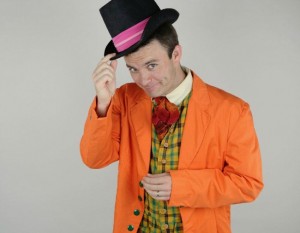 I am a huge fan of Roald Dahl and I love the story of Willy Wonka.  Growing up the movie version starring Gene Wilder was one of my absolute favorites…I loved the music, the Oompa Loompa’s, the completely fantastic world of the chocolate factory…loved it all!  I was so very excited to see that The Children’s Theatre of Cincinnati had chosen Willy Wonka Jr. as one of this season’s productions…and I was even more excited to see Local 12’s Bob Herzog cast in the role of Willy Wonka himself!

Here’s a little about the show from The Children’s Theatre of Cincinnati:

WONKA JR. directed and choreographed by Jay Goodlett.  Roald Dahl’s timeless story of the world-famous candy man and his quest to find an heir comes to life in this stage adaptation of Charlie and the Chocolate Factory, which features the songs from the classic family film Willy Wonka and the Chocolate Factory.  LOCAL 12’s Bob Herzog will play the famous chocolatier, Mr. Willy Wonka, in the production.

“Roald Dahl’s Willy Wonka JR.” follows enigmatic candy manufacturer Willy Wonka as he stages a contest by hiding five golden tickets in five of his scrumptious candy bars. Whoever comes up with these tickets will win a free tour of the Wonka factory, as well as a lifetime supply of candy. Four of the five winning children are insufferable brats: the fifth is a likeable young lad named Charlie Bucket who takes the tour in the company of his equally amiable grandfather. The children must learn to follow Mr. Wonka’s rules in the factory–or suffer the consequences.

So exciting!  I really would have loved to play the part of Veruca Salt as a child…how much fun would that have been?  My kids both do a pretty good Mike Teevee impression (or they would if I let them!)  Can you tell I am excited to see the show?  I can’t wait!

Family Friendly Cincinnati wants to send you and your family to see Willy Wonka Jr. while it’s at Taft Theater!  Read on to find out how you can win a Golden Ticket of your very own!

One lucky Family Friendly Cincinnati reader will win a Golden Ticket good for (4) complimentary $18 tickets to The Children’s Theatre of Cincinnati production — Willy Wonka Jr. on either Friday, April 4 at 7:30 PM or Saturday, April 5 at 5 PM!

So how can you enter to win? It’s easy. Simply answer question number one below. Additional items are bonus entries. Leave a separate comment on this post for each one you complete. A total of six entries are possible. You must reside in the Tri-State and be at least 18 years of age to enter.

Question:
Which of the Willy Wonka characters do you most relate to?  Charlie Bucket?  Augustus Gloop?  The man himself – Willy Wonka?

That’s it…that’s SIX ways to enter which means SIX chances to win!  A winner will be drawn (randomly) Wednesday, March 26th at 8PM and notified via email (we’ll also announce it our our Facebook page). Winners will have 24 hours to respond or another winner will be chosen.

disclosure: The Children’s Theatre of Cincinnati provided us with tickets to enjoy the show with our family, as well as tickets to give away, in return for sharing information on the production.