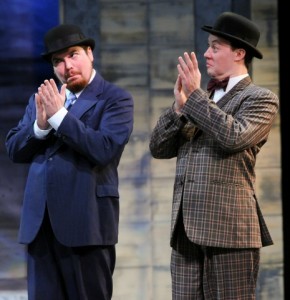 We love Cincinnati Shakespeare Company!  They are currently celebrating their 20th Anniversary season and every offering has been amazing.  From The 39 Steps and Twelfth Night to Every Christmas Story Ever Told and Hamlet…every single production shines with the brilliance and talent that makes Cincy Shakes a local treasure.

Hamlet (one of this writer’s favorites!) ends its run on February 8 so you still have time to try to grab a ticket…but if you can’t make Hamlet, don’t fret-you can catch all of the same characters in Cincinnati Shakespeare Company’s next offering:  Rosencrantz and Guildenstern are Dead!

Here’s a little about the show from Cincy Shakes:

Tom Stoppard’s comedic tour-de-force “Rosencrantz and Guildenstern Are Dead” turns “Hamlet” on its head, telling the tale from the bewildered perspective of Rosencrantz and Guildenstern, two minor characters in Shakespeare’s tragedy. As the befuddled duo struggle to keep up with the events around them, they become increasingly aware of the possibility that they might just be fictional characters. The entire cast of Cincinnati Shakespeare’s recent critically acclaimed production of “Hamlet” returns for this delightfully erudite vaudeville production.

Cincinnati Shakespeare’s resident ensemble has the unique ability to pair Shakespeare’s classic masterpiece, “Hamlet” with Tom Stoppard’s contemporary masterpiece “Rosencrantz and Guildenstern Are Dead”, further enhancing the experience for audience members, especially those who see both productions. “It is one of funniest and smartest comedies of the twentieth century,” says director Jeremy Dubin, “Doing it back to back with “Hamlet” will give audiences a chance to see the other side of the coin- trust me, that’s really funny especially if you know the play.”

The director Jeremy Dubin continues to say, “this is, hands down, my favorite contemporary play. It may well be the smartest comedy ever written- with due reverence to its literary forebear Waiting For Godot.  Stoppard’s wit, humor, intelligence, and his loving irreverence towards Shakespeare (which he would go on to indulge in Shakespeare in Love) absolutely shine in this play. Plus, this production features one of my favorite comedy duos: Billy Chace and Justin McCombs. Yep, this one’s going to be a dilly.”  Longtime resident company members, Billy Chace and Justin McCombs return to the stage as the title characters.  Audiences have already delighted in the hilarious antics of Mr. Chace and Mr. McCombs in the sold-out productions this season of “The 39 Steps” and “Every Christmas Story Every Told” in which both actors were featured.

Having seen many amazing Cincinnati Shakespeare Company actors in action before I am thrilled to get to see them play some of my favorite literary characters in such a fun, witty production.  What a perfect date night..and just in time for Valentine’s Day!

(From left) Billy Chace as Guildenstern, Brent Vimtrup as Hamlet and Justin McCombs as Rosencrantz in CSC’s 2014 production of Tom Stoppard’s “Rosencrantz and Guildenstern Are Dead” Photo by Rich Sofranko.

Want to take your sweetie out for a fun night of theater?  Read on to enter to win a pair of tickets to see Rosencrantz and Guildenstern are Dead at Cincinnati Shakespeare Theater and treat your SO (or your Mom, BFF….you get it!) to an amazing night out!

Giveaway is for TWO tickets to the Cincinnati Shakespeare Company production of Rosencrantz and Guildenstern are Dead.  Winner can pick from the following dates:  Feb. 12, 13, 14, 15, 20, 22, or 23.

To enter, simply answer this question:  Who will you take to see Rosencrantz and Guildenstern are Dead?

It’s date night in my house!  I already have the sitter lined up!  I cannot wait to have a night out with my own sweetie, and I can’t think of a better way to spend our Valentine’s Day!

For additional entries do one, or all, of the following  (and leave a separate comment for EACH entry in the comment section below to be entered):

That’s FIVE ways to enter which means FIVE chances to win!  One winner will be randomly drawn on Friday, February 7th at 2pm.  Winners will have 24 hours to respond or another winner will be drawn.   Must be 18 and a resident of the Greater Cincinnati area to qualify to win.  Tickets will be made available at Will Call at Cincinnati Shakespeare Company box office by Noon the day of your event.  Photo ID required in order to claim your tickets.

Don’t want to wait to see if you win?  Here are the details on the show:

Rosencrantz and Guildenstern Are Dead By Tom Stoppard, Directed by Jeremy Dubin.

Performances of “Rosencrantz and Guildenstern Are Dead” are scheduled from February 14- March 9 on Thursday, Friday & Saturday evenings at 7:30pm and Sundays at 2pm.  Preview performances are on Wednesday Feb. 12 and Thursday Feb. 13 at 7:30pm and tickets are $20.  No performance on Sunday February 16.  The theater is located at 719 Race Street, downtown Cincinnati, two blocks west of the Aronoff Center.  Single ticket prices range from $22-$31 on Thursdays and Sundays and from $26-$35 on Fridays and Saturdays.  If available, $14 student rush tickets may be purchased 30 minutes before a show with a valid student ID.  Visa, Discover, MasterCard, and American Express are accepted.  Ticketing fees may apply.  Discounts are available for students, seniors and groups as well as Enjoy the Arts and AAA members.  To purchase tickets or for more information, call the CSC Box Office at 513.381.BARD (2273) ext. 1, or go online at www.cincyshakes.com.