Babies are adorable. Their diapers, not as cute. We’ve all had to deal with years of stinky diapers and buying diaper pails that say they contain the smell, but just don’t always cut it. To anyone in the market for a diaper pail, there’s something new on the market and it was developed right here in Cincinnati. We were able to talk to David Schneider, one of the creators of Whisper Diaper Pail, to learn more about it. 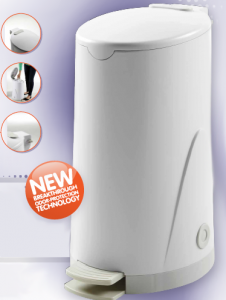 The Whisper Diaper Pail really is a Cincinnati family product. It was created by David Schneider, PhD and father of 5 from Union, his father, Chuck Schneider, PhD of Villa Hills, Stephanie Hughes, PhD at Northern Kentucky University and her brother Richard Hughes PhD at Ohio State University.

David and Chuck had been developing odor control technology since the 1990’s when David gave a series of lectures at NKU’s Haile/US Bank College of Business (where he met Stephanie). She had been considering a solution to her own pet waste problem and contacted David for help. It was then that the two decided that they could also create a solution to the problem of stinky diapers. At the time there were lots of name brand diaper pails trying, but none of them where really tackling the stink.

They wanted to create a product that moms wanted. They reached out and asked a variety of moms from across the Tri-state who had little ones in diapers to test various prototypes of the diaper pail over the course of a year and give feedback. David says that “One big thing we hadn’t anticipated getting feedback on was the trap door. In a few prototypes with the foot pedal you could still see the dirty diaper in the pail. We were worried about odor control, but the moms we worked with brought to our attention that they not only didn’t want to smell the dirty diaper… they didn’t want to see it either.”

What makes Whisper Diaper Pail so effective is the numerous layers of smell protection. The pail has a lid (which locks to keep little hands from getting in), a trap door covering the diapers and an odor eliminating spray. The ODOGard Spray, which is ECO-friendly, non-flammable, water-based and safe around people and pets, actually attracts and locks away the stinky diaper smells.

Everything about the Whisper Diaper Pail is also designed to be convenient. You can use regular kitchen trash bags, there’s a foot pedal to open the lid, and you can use the spray to get rid of other smells in your house in addition to the dirty diaper smells.

As a father of 5, David understands the need for Whisper Diaper Pail. “With 5 kids we dealt with dirty diapers for 12 years,” David said. “This diaper pail would have been tremendous to have then.