We are big comic book fans in my family.  My boys have been reading comics since, well, since before they could actually read. We are annual Free Comic Book Day patrons (you can read about that here).  We also love superheroes, games, LEGO, costumes, and more.  Lucky for us the Cincinnati Comic Expo is in town soon and has all of this and more!

You won’t just find hundreds of amazing comics when you attend the Expo, you’ll also have the opportunity to meet amazing comic book artists and creators such as Jeff Lemire and Doug Mahnke (Justice League of America) , actors such as John Rhys-Davis (Indiana Jones and Lord of the Rings) and Marina Sirtis (Star Trek-The Next Generation), and be able to check out the original 1966 Batmobile, The General Lee, and even The Tardis (for those Whovians in our midst).   Brick lovers can  participate in LEGO activities (12 and under FREE) such as speed building and scavenger hunts.   For those Star Wars fans out there (and who isn’t?!) there will be a Droid Hunt sponsored by The Ohio Garrison of the 501st Legion (Storm Troopers!)  Or you can visit Kids Con where there are a ton of crafts and other fun activities, get creative at the art cart, cosplay your favorite character, play games…the list goes on and on! 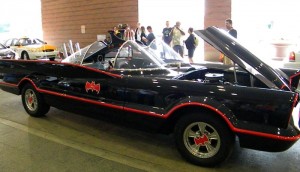 The Cincinnati Comic Expo is fun for ALL ages.  Parents-this is a sure fire way to make sure your kids think YOU are a superhero!  Andrew Satterfield, creator of the Cincinnati Comic Expo and father of four, knew he wanted to create an event that would allow all ages to have fun at the same time, and something that would open the world of comic books and comic book artists to a new generation.  There is no better way to introduce your kids to comic books and the world of creativity they open up!

I’m really looking forward to checking out the Expo with my family when it comes to town and I know you are too.  That’s why Family Friendly Cincinnati has partnered with Cincinnati Comic Expo to bring you a fantastic giveaway!

The Cincinnati Comic Expo and Family Friendly Cincinnati want you to take the whole family to the Expo and have a Super weekend full of comic book fun!  We have a pair of tickets to give away to one lucky FFC reader.   Your tickets will get you and your family (children 12 and under are FREE) into the preview night on September 13 from 5-7 pm, and then again on Saturday and Sunday (Sept. 14 & 15) at 10 AM both days.  That’s an entire weekend of fun!!

To enter just answer this question:

Who was your favorite comic book superhero as a child?

Green Lantern?  Batman? Wonder Woman?  Which adventure did you most look forward to every week at the comic book store in your childhood, just let us know in the comments and you are entered to win.  You weren’t a big comic book fan as a kid?  You must still have a favorite superhero, though…right?  Just tell us your fave and you’re entered!

Extra entries can be had by doing one or all of the following and leaving a separate comment for each:

That’s it!  That’s FOUR ways to enter which means FOUR chances to win!  Winner will be drawn (randomly) Monday, September 9 at Noon and notified via email (we’ll also announce it on our Facebook page). Contest is open to Tri-State residents ages 18 and up. Winners will have 24 hours to respond or another winner will be chosen.

Tickets for the Cincinnati Comic Expo start at just $15 (and remember..children 12 and under are free!)  Tickets can be purchased online at www.cincinnaticomicexpo.com.  The Duke Energy Convention Center is located at 525 Elm Street in Cincinnati.

Oh and did I mentioned that the Cincinnati Comic Expo is sponsored by, among others,  one of  Family Friendly Cincinnati’s favorites- Tom + Chee?  How tasty is that!  See you there and good luck!

disclosure: A pair of tickets were provided to Family Friendly Cincinnati to give away to our readers, and a pair were provided to allow us to take our family to the event as well.  All opinion expressed above are 100% our own.

When not blogging at Family Friendly Cincinnati you can find Amy Q. writing at her own blog: www.in-a-galaxy.blogspot.com.