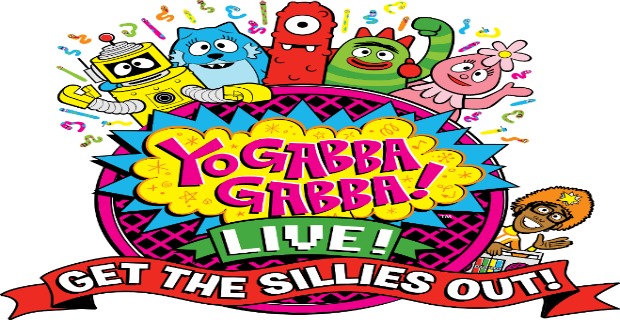 This contest is now closed.  Congratulations to Kasey who said “Our favorite character is Brobee and our favorite guest star is Weird All Yankovic”.  Check your in box Kasey!  You have 24 hours to respond.  Thank you to everyone who entered!

YO GABBA GABBA! LIVE! GET THE SILLIES OUT! TOUR is coming to Cincinnati’s Aronoff Center for the Arts-Procter & Gamble Hall Thursday January 10th 2013 for two shows at 3:00pm and 6:00pm.  Tickets are now on sale!  For a complete list of tour dates, cities and show times, and a preview of the show, visit www.yogabbagabbalive.com.  This is the first show of the 50 city tour, and you don’t want to miss it!  Read what the folks at Yo Gabba Gabba! have to say about the show:

The sillies are crazy little creatures that live inside of us and need to be shaken out! DJ Lance Rock and everyone’s favorite cast of colorful characters are calling all fans in Cincinnati to get ready to jump, shake and shimmy them out at the new live tour Yo Gabba Gabba! LIVE!: Get the Sillies Out!.

Yo Gabba Gabba! is an award-winning, live-action television series and live stage show whose unconventional formula has created a triple stacked fan base, making it one of the most popular entertainment properties among preschoolers, parents and indie music lovers alike. The television show, now in its fourth season, airs several times a day on Nick Jr. 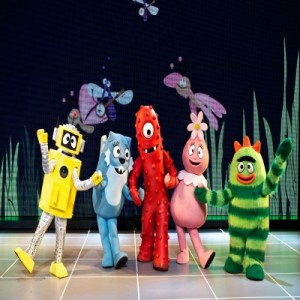 Tickets start at $26. VIP Party packages are available as well and include a ticket in the first 15 Rows, a pass to “Get the Sillies Out” in the private VIP room featuring a super fun party with the Gabba Gang and more. Children under 1 year old do not require a paid ticket to sit on a parent’s lap.

Thanks to the Yo Gabba Gabba! folks, we have a FAMILY FOUR PACK of tickets for one lucky winner.  To enter, simply leave a comment here telling us who you’re favorite Gabba star is AND your favorite GUEST STAR from any of the television episodes.  You need both to be entered to win.  A winner will be drawn on Thursday December 27th at noon.

Disclosure: In exchange for my time and efforts in attending shows and reporting my
opinion, as well as keeping you advised of the latest discount offers, I have been provided with complimentary tickets to see this show. Rest assured all opinions are 100% my own!