Did your family watch the Olympics?  I know mine did!  During the Olympics, I made sure to highlight the people who were from the Cincinnati area.  I felt it helped make a connection with my kids and they were more involved in learning about the whatever sport it was.

However, the Olympian that got them the most excited was the one from our own hometown.  Kayla Harrison participated in judo during the London Games and brought home the Gold Medal.  She is the first American to capture Gold in judo.  For our town, this is a BIGdeal.  To honor her Middletown is putting together a celebration and parade. 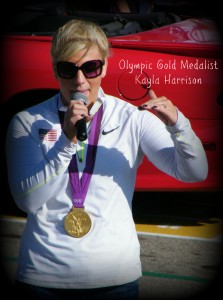 This is Kayla speaking this morning at my daughter’s school. She’s a terrific speaker.

The parade begins this evening at 6 P.M.  It will start in downtown Middletown at the corner of Reinartz Blvd. and Verity Parkway.  The parade route continues down Verity, turning onto Central Avenue and ending at the city building in the heart of Middletown.

The city is encouraging everyone to attend and sport your red, white and blue.  Signs are also encouraged.

After the parade ends, a celebration will be held at the city building where skydivers, music and a balloon launch.  Kayla will be giving a speech as well.

Come and celebrate with us!