I did not know until this year that April is “National Donate Life Month”, even though it has been designated as such since 2003. The reason that it came to my attention this year is because our friends’ baby was waiting for a heart this month. Before this, I had not known anyone waiting for an organ to save their life. Sure, I read about it in books, and saw transplants take place on Grey’s Anatomy, but that’s all so surreal until you know someone who is waiting. All of a sudden I was consumed with thoughts about organ donation. Yes, I will be an organ donor, it says so on my license, but I had never given thought to what would happen if our children needed a transplant to save their life. All of a sudden it was very real. A baby just a few days younger than my own son needed a heart. So in honor of baby Milosh, I want to share his story, and share a few facts about Organ Donation, even though the month of April is almost over, I think that every month should be National Donate Life Month. Very few of us want to think about death or dying, and it’s definitely not a dinnertime topic, so I try to think about in terms of sharing the gift of life with others.

So without further ado, I present you with the story of Milosh, written by his mother. He’s a very special little boy who just keeps fighting, with little tiny baby steps.

Very few families are able to say an organ donor saved their child’s life and yet my family is in such a position. Before I talk about my son’s heart transplant I will start at the beginning of our journey. Milosh was born with a rare, genetic disorder called Barth Syndrome. It affects only males and currently there are less than 150 boys and men diagnosed worldwide. Barth Syndrome is a metabolic disorder and can cause cardiomyopathy (an enlarged heart), neutropenia (a reduction in a type of WBCs which results in immunity problems), muscle weakness and delayed growth.

Milosh was born in heart failure; because of this all his other organs went into failure within 24 hours of his birth. He spent the first 4 months of his life at Cincinnati Children’s Hospital and Medical Center. During those long months the incredibly gifted doctors, nurses and medical staff (along with God’s grace) helped Milosh and his organs to recover. His heart, however, was still bad enough to require him to be listed at 1A status (the highest medical need) on the heart transplant list. We waited over 2 months for a new heart. Milosh even came home to wait. Then one day at a cardiology appointment an echo revealed Milosh’s heart function had improved so much that the doctors wanted to wean him from some of his heart medicines. If this wean was successful they would remove him from an active status on the transplant list. We were overjoyed and at the same time very worried. With Barth Syndrome, the heart condition is undulating meaning it can get better and worse and there is really no way to predict how things are going to go.

Milosh was weaned from those medicines and went inactive on the transplant list. We enjoyed 6 months of good check-ups. We counted our blessings every day and thanked the Lord for his continued presence in our lives. Then one day early in December an echo revealed Milosh’s heart was not functioning so well anymore. We would have 3 more months of poor check-ups before Milosh became bad enough to be re-admitted to the hospital. Although we were devastated he had go back to CCHMC we were grateful he stayed well long enough to celebrate Thanksgiving, Christmas and his first birthday at home with his family.
Once admitted back into C.I.C.U. (Cardiac Intensive Care Unit) Milosh deteriorated very quickly. The first major setback came when his lungs were no longer able to work on their own so he had to be intubated (have a breathing tube inserted and be assisted in breathing with a ventilator). Milosh was reactivated on the transplant list and again we waited. His heart got worse. His doctors talked to us about a Berlin heart (a mechanical heart). While this device has been used throughout Europe for over 20 years it is pending FDA approval in the United States. Milosh’s doctors applied for a compassion waiver in order to receive permission to use a Berlin on him. The surgery was going fine until he was taken off the bypass machine; Milosh’s lungs filled with blood. The doctor came out and told us they would have to remove the Berlin heart and put him on ECMO (a heart and lung bypass machine). We were crushed – while both devices come with many complications ECMO was the last thing we wanted because most babies will survive on this device only 2-3 weeks. When you are waiting on an organ you have no idea when that organ might arrive.

Our family gathered together and cried, prayed and then cried some more. The next time the surgeon came out he told us before they removed the Berlin Heart they called their representative first. He told them not to remove the heart. Instead they should add the “mechanical lung” part of the ECMO into the “circuit”. The quick thinking surgical team figured out a way to do it – and it worked! We have been told this setup has been done one other time on an adult in Germany. Milosh is the first baby in the world to have this device we are now affectionately referring to as BECMO. We knew there were still rocky times ahead of us, but we had bought Milosh more time, time to wait for his new angel heart.

Every night I would go to bed wondering if Milosh would be alive in the morning and also if this would be the night we would receive the call. I wondered that for the next 29 nights. Until the afternoon of April 4th – the transplant coordinator called us and said they had a heart for our precious son. I immediately thanked God – my son would now be given a second chance, he would live. We were filled with joy as well as the knowledge that somewhere a family (one we had been praying for since Milosh was listed for a transplant) was facing the worst possible thing anyone could ever imagine – the loss of their dear, precious child. We were amazed at this family’s strength for being able to see past their grief in order to help other sick children, in essence saying “Yes” to life which would keep other families from having to go through the same heartache they were experiencing. We owe our child’s life to them. However, their incredible bravery not only saved Milosh, it also saved our family. Milosh is now two weeks post transplant. His recovery has been slow but steady. We continue to pray for his donor family who will always hold a very special place in our hearts. Words cannot express the gratitude we feel for them. Soon Milosh will be returning home to his adoring big sister, his loyal dog, his playful cat and his grateful parents. This is all thanks to organ donation. Our family is one of the lucky ones. Milosh’s doctor told us only 1/3rd of the children waiting for a new heart will live long enough to receive that gift of life. Be a hero and please sign up to become a tissue and organ donor. 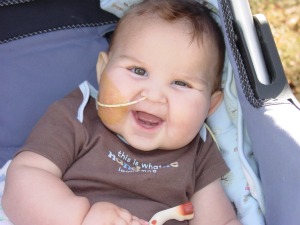 According to the Donate Life Ohio website: “Organ and tissue donation provides a “Second Chance” for thousands of people each year and is the result of people helping people – of ordinary people becoming “Heroes.”

When you make a personal commitment to be an organ and tissue donor, you can help save eight lives and improve the quality of nearly 50 people’s lives! Many organs and tissues can be donated, including the heart, liver, kidneys, lungs, pancreas, intestine, skin, bone, tendons, ligaments, vessels, heart valves, nerves, middle ear bones and eyes.”

Donate Life Ohio has been promoting National Donate Life Month this year with the Green Chair, which is a symbol of the 176 Ohioans whose chair “went empty” in 2010 when a life-saving organ transplant couldn’t be found in time, and the 3,350 Ohioans currently awaiting a life-saving organ transplant in Ohio. Donate Life Ohio uses the image of the Green Chair, and the rallying cry “Don’t Let Another Chair Go Empty,” to urge Ohioans to join the Ohio Donor Registry.