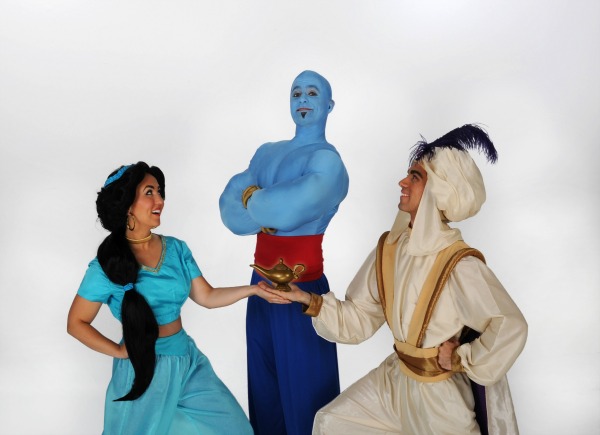 Last weekend my kids and I watched another spectacular performance at The Children’s Theatre of Cincinnati—Disney’s Aladdin JR.

My kids have declared this show their favorite among all the others they have seen at the Taft.

It’s my favorite this season, not only because I’m a huge Bob Herzog fan, but because they brought to the stage a Disney show that I have loved for years.

The Children’s Theatre of Cincinnati brings this story to life with vibrant song, energetic circus performers, interactive props and sets, and of course, the over the top Genie.

Local 12’s Bob Herzog plays the Genie, imprisoned by his Master’s demands, with his usual flare and energy.  We always love his references to local traffic during his performances.  The song “Friend Like Me”  was stuck in my head as I walked through downtown Cincinnati, back to the car, that evening.  That particular number was bigger than life, just as in the movie, complete with sparkly Vegas-style costumes and dancing.

As always, my younger two children were fascinated by the props and effects.  They loved the Genie ‘magically appearing’ via trap door and elevator on onto the stage.  When the flying carpet floated among the stars and over the earth, they were explaining to me the whole pulley system.  I love that they are into the behind the scenes action.  The play even featured several animal friends, created by humans in costumes, but fun none the less!

My daughter loved Princess Jasmine.  Of course, she was beautiful.  The characters’ costumes and appearance were so close to the Disney animated movie.

If you’d like to catch a performance, there is still time.  The last show is Saturday April 18th at 2:00pm at The Children’s Theatre of Cincinnati,  Taft Theatre, 5th and Sycamore Streets in Downtown Cincinnati.

Disclaimer:  I was given tickets in exchange for this review, but all opinions are my own.