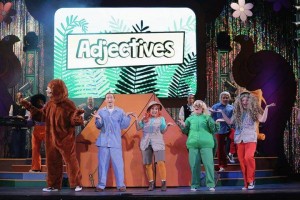 This weekend we visited The Children’s Theatre of Cincinnati to see School House Rock Live! JR at the Taft Theatre.  I used to hunker down with a bowl of cereal in front of our living room t.v. every Saturday morning and catch snippets of School House Rock when I was a kid.  The catchy tunes are still in my head today.  My kids had already heard some of the music, since I borrowed a DVD from the library, but I couldn’t wait for them to see the live production at Children’s Theatre.

They loved it and so did I.

My kids are ages 5, 7 and nearly 12.  They were captured by the music, the dancing and the fast paced show.  All three of them enjoyed it.  We left the auditorium debating on our favorite number.  Mine has always been “Adjectives” while my 11 year old loves “The Preamble”.  Of course, we all loved “Conjunction Junction”.

Here’s what The Children’s Theatre of Cincinnati has to say about the show:

This musical is adapted from the Emmy® Award-winning educational cartoon that rocked the house from the ‘70s to ‘80s each Saturday morning. SCHOOL HOUSE ROCK LIVE! JR. hits the Taft Theatre stage with a rock-and-roll revue, featuring local rock sensation, The Rusty Griswolds!

Tom is a frantic school teacher who is nervous about his first day teaching. When he turns on his television to calm his nerves, his surroundings come to life and his lesson plan is illuminated. Throughout the show, various characters help Tom create fun and interactive lessons to engage his students in all sorts of subjects. This show features middle school education through song and dance, including classic hits like “Conjunction Junction” and “Three is a Magic Number.”

And what better way to bring this musical to life than through the talents of the incredible local rock band, The Rusty Griswolds. Since 1999, The Rusty Griswolds have been performing; bringing energy as only they can to the best music of the 80s and SCHOOLHOUSE ROCK LIVE! JR. will be no exception!

If you are a fan of The Rusty Griswolds, you are in for a treat.  They were on stage in old school jackets playing all of the music.  It was fantastic.  With the spectacular music, big screen tv showing clips of the old cartoon, and brightly costumed actors dancing on stage, the production came together for a super fun hour of entertainment and learning. 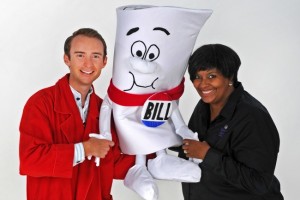 And, yes, my kids did actually learn!  On the way home, we all shouted ‘interjections’ and used adjectives to describe the weather.

If you go on Saturday February 21st, don’t miss Kid’s Kuisine, a tasty fundraiser for The Children’s Theatre of Cincinnati, presented by Cincinnati Magazine from 11:30 AM to 1:30 PM at the Taft Theatre Ballroom, 317 E. 5th Street, prior to the 2 PM performance of SCHOOL HOUSE ROCK LIVE! JR.   Kid’s Kuisine guests will enjoy food and drink from exciting sponsors while area restaurants will showcase creative kid’s menus.  There will also be “Play with your Food” stations plus young chefs will get inspired at the cooking stage. Children’s and adult tickets are $10 per guest when purchased in advance and $15 per guest at the door.  To purchase visit cincinnatimagazine.com/cmevents or call Chris Ohmer at 513-562-2777.