It’s back –FREE Shakespeare in the Park!  Cincinnati Shakespeare Company is bringing us yet another season of fabulous performances in gorgeous park settings.

Here’s a little about this season’s performances as well as info on the new BIGGER than ever tour!

Cincinnati Shakespeare Company is proud to announce the 2014 FREE Shakespeare in the Park Tour presented by PNC!  This year’s tour is bigger than ever with 26 performances of “Macbeth” and “A Midsummer Night’s Dream” throughout the Greater Cincinnati and Northern Kentucky area at local community parks and venues.  These performances are FREE and open to the public!  “A Midsummer Night’s Dream” is directed by CSC Ensemble Member Nicholas Rose and “Macbeth” is directed by CSC Ensemble Member Miranda McGee.  The cast features six actors from CSC 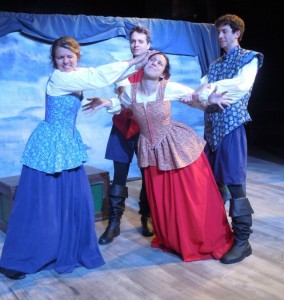 Resident Ensemble.  Following the Park Tour, these shows will travel and tour to local schools, community centers, venues and other performing arts locations through May 2015.  Last year, CSC’s FREE Shakespeare in the Park tour had over 7,000 people in attendance!

‘Midsummer Night’s Dream’ and MacBeth — two of my personal favorites, and sure to become yours as well (if they aren’t already!) There are so many parks and so many performances (26 to be exact!) that there is sure to be one in your neighborhood.  So pack up some picnic blankets or camp chairs, a basket full of dinner goodies, and enjoy the show!

Admission to Cincinnati Shakespeare Company’s Shakespeare in the Park Tour is free.  All performances are open to all and are general admission, open seating.  Arriving early is recommended for best seating. For questions regarding inclement weather or for details and rules regarding outside food and drink, please call the individual parks and venues.  For more information on the park tour visit Cincinnati Shakespeare Company’s website. 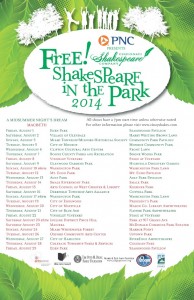