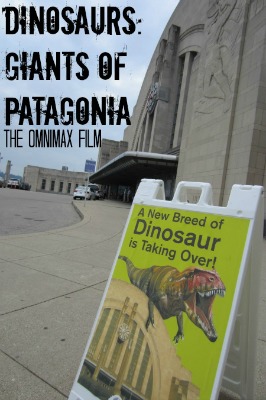 Gondwana and the writers at Family Friendly Cincinnati (and our children) were very very impressed.  You can read all about the exhibit in this post on Family Friendly Cincinnati.  If you have not yet been to the Ultimate Dinosaurs exhibit, I highly recommend you visit it soon!  And remember, once a Member pays to see the exhibit once they can go back to see it again and again as much as they want, free of charge.  That’s a bonus!  And don’t forget to get the free Ultimate Dinosaurs app so you can see some of the dinosaurs come to life and jump right out of the floor at you!

While you are there seeing the exhibit, you might want to make a day of it and get yourself some tickets to the OMNIMAX so you can see Dinosaurs: Giants of Patagonia.  I took the four kids and it was an FANTASTIC show!  We’ve seen lots of flicks at the OMNIMAX, but I think this one was the kids’ favorite so far!  They sat in awe through the entire show, hardly moving an inch.  Although, Henry (who is 3.5 years old) was a bit nervo us, as the movie can be intense at times.  He said he loved the show, but sat through the show with his hands poised next to his face in case those eyes needed to be covered.  It was quite cute.  I offered to take him out of the show if he was scared, but he adamently refused.  After the show we had an animated discussion about what we saw and learned.  And the kids were still talking about the show days later.  In fact, Henry keeps asking if we can go back and watch the movie again.

Dinosaurs: Giants of Patagonia is a one of a kind show, and it truly is BIGGER than life.  I mean, it really gives you a sense of how GIANT these dinosaurs were as they tower over you on the screen.   And it wasn’t just the kids who were fascinated…I thought the show was quite impressive as well, and I know I learned some new things about Dinosaurs!

Here’s more about the Dinosaurs: Giants of Patagonia from the Cincinnati Museum Center site:

discoveries in the Patagonia region of South America and travel back in time to see these amazing beasts come to life. Patagonia has given us the largest living animal to have ever walked the Earth: The titanesque plant-eating Argentinosaur, and its nemesis, the Giganotosaur, a bipedal carnivore, that could easily challenge the famous T-Rex.

Deeply rooted in science, the film carries the audience through the lives of two specimens of these superb achievements of evolution. The action is intense and the landscape is out of this world. From space, we have the perfect vantage point to witness the movement of the tectonic plates, and the arrival of a comet that may have sealed the fate of the Dinosaurs. 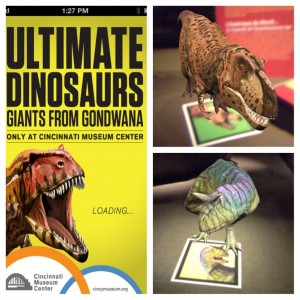 And don’t forget to get the FREE Ultimate Dinosaurs APP before you visit the exhibit!  I’m telling you, it really makes the dinosaur experience magical.  I think I was just as giddy about the app as the kids were, haha.

Disclaimer: I was given four free tickets to see Dinosaurs: Giants of Patagonia at the OMNIMAX at the Cincinnati Museum Center.  Opinions are all my own.