The Cincinnati Museum Center has an AWESOME new exhibition going on right now: Ultimate Dinosaurs, Giants from Gondwana.  We were 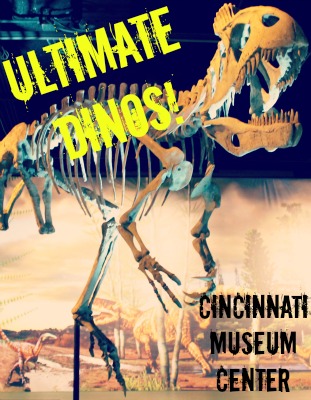 lucky enough to get a sneak peek of the exhibit last week before it opened, and I’m here to tell you that you need to take your family and get to the Museum Center to see these Ultimate Dinos!

Here’s a description about the exhibit from the Cincinnati Museum Center:

Forget about the dinosaurs that you know – prepare for a whole new breed of beast! On June 13, Cincinnati Museum Center welcomes some of the largest and most unusual dinosaurs to have ever roamed the planet in the U.S. premiere of Ultimate Dinosaurs: Giants from Gondwana.

Based on groundbreaking research from scientists around the world, this exhibition reveals bizarre, unusual looking dinosaurs virtually unknown to North Americans because they evolved in isolation in South America, Africa and Madagascar. Ultimate Dinosaurs features three Augmented Reality (AR) experiences, used in creative ways to bring these specimens to life and illustrate the story of how a dynamic Earth with drifting continents affected the evolution of dinosaurs, from a Southern perspective. Surrounded by life-like environmental murals, the exhibition features real fossils, skeletons and 20 full-scale skeletal casts, many of which have never been seen before in the U.S.

Here’s a list of reasons why we think that

Have I convinced you yet?  If not then you need a talking to from Giganotosaurus!  Pack up the family…boys and girls, old and young, and head to

the Museum Center to be wowed by a trip back in time to visit the dinosaurs!   Follow all of the Ultimate Dino mania via @cincymuseum on twitter, using hashtags #UltimateDinos and #CincyRawrs.  Add your own instragram pics and tweets to the stream!